All content on this page is sourced from Wines of Argentina. 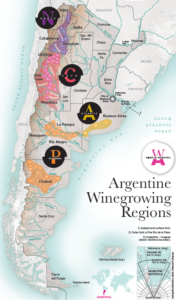 In the center west of the territory, at the foot of the Andes mountain range, Mendoza holds 75% of the total vineyards in Argentina and the largest number of wineries in the country. This makes it the most important wine province and one of the main producing centres in the world.

The highest peaks of the Andes are found in Mendoza: with 22.832 ft, Aconcagua is the highest peak in America. The presence of the Andes, which act as a barrier to the humid winds of the Pacific, added to the distance to the Atlantic Ocean, shape the climate generating ideal conditions for the cultivation of vines. The altitude, continental climate, heterogeneity of soils and the snowmelt are key factors for the production of excellent wines, which add to a significant winemaking tradition.

The territory of Mendoza can be divided into five large sub-regions, which give the varieties their particular characteristics: Valle de Uco, integrated by the departments of Tunuyán, Tupungato and San Carlos; Primera Zona, which includes the departments of Luján de Cuyo and Maipú; the Northern oasis (Lavalle and Las Heras), the East (San Martín, Rivadavia, Junín, Santa Rosa and La Paz) and the South (San Rafael, Malargüe and General Alvear), covering practically the entire provincial geography.

The high degree of development achieved by viticulture, added to new research promoted by a generation of restless producers, has led to the identification of micro-regions with different terroirs, reflecting the diverse character of Argentine viticulture. It is specifically in Malbec where this quality is best appreciated.

With 20% of the total area of ​​Malbec planted in the country, Mendoza is the main producer, although Bonarda, Cabernet Sauvignon, Syrah and Tempranillo also stand out among its predominant varieties.